Adobe recently announced that “Save for Web” in Photoshop is a “legacy feature” which won’t be improved. I decided to have a look at Adobe Photoshop CC (2015.0.0 Release 20150529.r88 x64) to see the impact of its many different “save” commands on the resulting file size.

First, I created a trivial 20×20 image and drew a red dot in the middle of it. 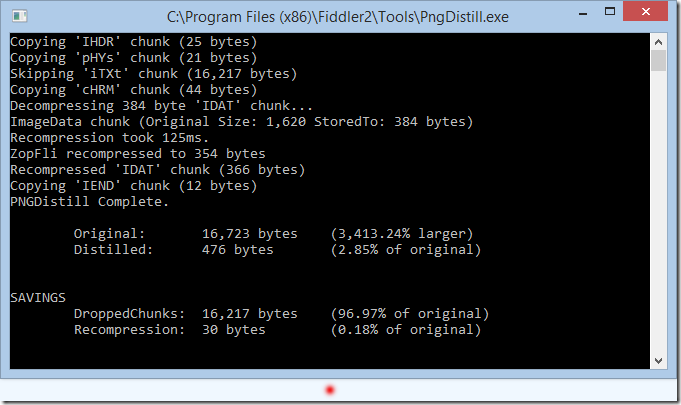 If I instead use File > Export > Quick Export as PNG, the result is a 571 byte PNG that can be shrunk by 35 bytes to 536 using the Zopfli compressor: 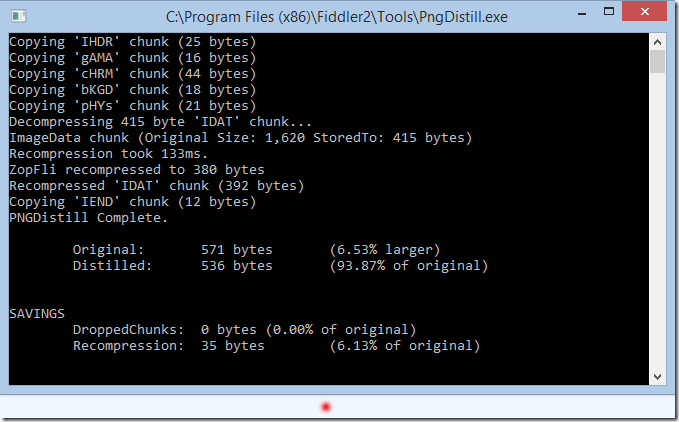 If I untick the “Transparency” checkbox:

…the file grows to 662 bytes. Interestingly, however, when I retick that same box, the file now shrinks down to 571 bytes. A quick investigation shows that unticking and reticking the box silently changes the PNG from a 48 color palette to a RGB/A image, which is smaller in the case of this small image.

If I use the new File > Generate Assets checkbox and name my layer “reddot.png” the automatically-saved PNG file in the PSD’s subfolder is the 608 byte version. 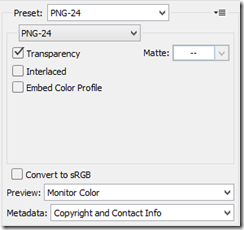 … Photoshop reassures me that I’ve made good choices:

… But it’s lying. The information at the bottom left doesn’t account for the 935 bytes of useless metadata embedded in the image:

I need to change the Metadata dropdown to None:

…to get Adobe to omit most of the metadata, although it still wastes 37 bytes of your file advertising Adobe’s product. If you now distill the file, you can save those 37 bytes and pick up a 29 byte improvement in compression for a final file size of 411 bytes.

So, as you can see, Adobe Photoshop can save this simple 477 byte image in sizes ranging from 477 bytes to a whopping 16723 bytes. The Adobe overhead isn’t “fixed”—it can be much larger: a 207K PNG file on Adobe’s website has 132K of metadata in it, while a 49.1K PNG file on Microsoft’s website contains 48.9K of Adobe metadata.