I tweet about the new Microsoft Edge browser quite a lot. I wanted to have a blog post to collect some of the feedback I’ve provided so I have it in one place and can update as needed.

Note: This post mostly focuses on the bad parts of Edge; there are plenty of good parts, including much improved standards support and a safer default security posture.

Last Update: November 2015 Update Most of the trivial issues are fixed; the bigger problems are mostly unfixed

1. The “Should I trust this site” link in the HTTPS trust badge goes to page that doesn’t even attempt to answer that question. Update: Sorta fixed.

2. The hover “tooltip” on that site doesn’t do escaping of & properly and also has a text-truncation bug:

3. The RichText tests at www.browserscope.org hang the browser.

4. When Windows UAC is set to “Don’t dim my desktop”, launching a download (e.g. setup.exe) that requires elevation causes the consent window to appear behind the Edge window, effectively causing a denial-of-service condition that hangs the tab.

6. Remember focus rectangles that show which button is active? Yeah, I miss those.

7. Adding a folder silently fails if the name chosen contains any “special filesystem characters” like ?, :, *, etc.

9. Microsoft Edge fixed the longstanding (and amusing, due to its root cause) bug whereby it exported HTTP Archive (HAR) files as XML instead of JSON. Unfortunately, the new JSON exporter omits the required encoding=”base64″ attribute when including binary bodies. Also unfortunate, F12 doesn’t write the creator version field in the JSON; a proper version number here would allow tools like Fiddler to better accommodate the buggy output.

10. CSS Animations that have been offloaded to the GPU (“independent animations”) cannot be stopped. The only workaround is to prevent them from being independently animated.

1. Windows 7 Support – After strongly hinting that IE11’s successor would run on Windows 7, the team changed course and said that Edge wouldn’t appear on Windows 7 at release but they’d promise to “watch customer demand” for a Windows 7 version. From both mind-share and market-share perspectives, I think this is a very risky move.

2. Extensions – Edge was expected to contain a new Chrome-like extension model, but this slipped from the original release. There’s currently no ETA for its arrival. Update: Delayed to 2016.

3. Tracking Protection Lists –  A Tweet from an IE engineer implies that these will not be coming back to Edge and the future extension model is expected to serve as a replacement. This is unfortunate, as a good TPL dramatically improves the speed at which pages load and significantly reduces the number of pages that can cause the browser to hang or crash.

5. Click-to-Play – There’s no way to configure the built-in Flash object to operate in a “click-to-play” manner.

6. Report Phishing – The old “SmartScreen > Report this Site” experience has been removed and replaced with a “Feedback and Reporting” widget that accepts all sorts of feedback about both the browser and the site. It is likely that this experience does not collect the same level of data as the old experience, meaning that some reported phish may escape.

7. Menus & Chords – When Microsoft Office dumped the menus in favor of the ribbon system, they ensured that the old accelerator keys and keyboard chords (e.g. Alt+F,C to “Close tab”) continued to work. Edge makes no such attempt, and thus my muscle memory built up for over a decade now fails.

8. JavaScript Uncontrollable — Unlike nearly every browser, Edge offers no way to disable JavaScript on a per-site or global basis, even to test <noscript> tags.

9. Certificate Inspection — There’s no way to inspect the certificate presented by a HTTPS site. 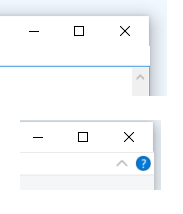 2. There’s no visual distinction between the title bar and the menu bar in some apps (like Notepad). As a consequence there’s no way to tell whether click & drag will drag the window or do nothing at all.

4. The experience for making applications default has changed again in Windows 10. While the Windows 8/8.1 experience wasn’t awesome, the Windows 10 experience is a slap in the face to the user. Mozilla is complaining, justifiably.

5. Win10/.NET4.6 carries over the Shell/.NET bug whereby double-clicking any label control copies its text to the clipboard. The behavior change in the comctl32 label control was checked in during Windows Vista by a rogue dev without a spec or an explanation.

6. Windows 10 carries over the Windows 8 regression whereby proxy-change calls are ignored during shutdown.