I’ve built a handful of Chrome extensions this year, and I wrote up some of what I learned in a post back in March. Since then, I’ve found two more tricks that have proved useful.

Simply open the chrome://extensions page and an Errors link will appear available for extensions after you tick its Collect errors checkbox: 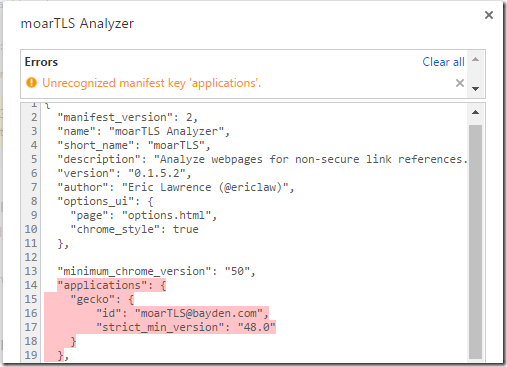 Next, you’ll often end up with both a public version of your extension and a side-loaded developer build installed at the same time. If their Action icons are the same, it’s easy to get confused about which version is which.

To help clarify which is the development version, you can easily add a Dev badge to the icon of the developer build:

The code to add to your background.js file is straightforward and works even if the background page is not persistent:

As mentioned in my last post, the Chrome Extension Source Viewer remains invaluable for quickly peeking at the code of existing extensions in the store.

Finally, some day I’ll need to spend more time looking through the many Extension Samples published by Google.

I’ve had more fun writing Chrome extensions than anything else I’ve built this year. If you haven’t tried building an extension yet, I encourage you to try it out. Best of all, your new Chrome extension development skills will readily transfer to building extensions to Opera, Firefox, and Microsoft Edge.

Impatient optimist. Dad. Author/speaker. Created Fiddler & SlickRun. PM @ MSFT '01-'12, and '18-, presently working on Microsoft Edge. My words are my own.

Email Tracking Links are the Worst

Do Not Lie to Users